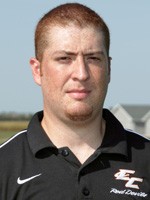 “Having worked with Brian Galvin in a Division I soccer program as well as with academy teams and summer soccer camps, I have seen first-hand Brian’s drive, determination and passion for coaching goalkeepers. He is always well prepared and organized with a variety of different exercises that challenge his players, but also make the sessions fun. As a fellow coach I have learned much from Brian and am grateful I was able to see many of his goalkeeping sessions, many of which I use to train my goalkeepers. Any player looking to improve his or her goalkeeping ability would be lucky to have Brian as his or her coach.”

“Brian is an excellent coach, and although sometimes unconventional with his methods, he manages to bring the best out of any keeper he has coached. You can expect improvements in the all around game of a goalkeeper, and most crucially, he has the uncommon ability of breeding confidence in his goalkeepers, bringing consistently good performances come game time.”

“Elena had the privilege of training with Brian from the age of 9-13 with the Columbus Crew Juniors Soccer Club. Elena enjoyed the challenge and competitive nature of Brian’s training sessions. Brian set the standard very high and her confidence grew as she was given the training and ultimately the skills to meet the goals in each session. Brian was always prepared and exceptionally knowledgeable not only about soccer and training, but about appropriate child development. Brian’s GK training provided Elena a wonderful foundation to go on and play high school soccer, where as a freshman, she is currently starting on the varsity girls team. She proudly was the only freshman to play every minute of every game. We love Brian and are grateful that Elena was able to work with him during his career in Columbus, Ohio.”

“I trained with Brian for two years, in which he developed me to be a top division 1 high school player. Throughout my time with coach Brian he developed my goalkeeping skills from a scared kid standing between the posts to a kid attacking every play with confidence. Every training session was different but the same in the sense that it pushed the mental and physical fitness of every keeper. Also while training with coach Brian I learned to be a leader because of the positive atmosphere and the “we do everything as a team” mentality, things that stuck with me as I continued with my soccer career.”

“Through the Columbus Crew Juniors program in central Ohio, Brian coached my 15 year-old son and 12 year-old daughter when both were starting out in the U8 and U10 age groups.  Not only were his methods age-appropriate and educational, he instilled in my kids a motivation for excellence and love for the game one does not find in coaches in traditional youth sports in America.

While I fancy myself a pretty knowledgeable soccer fanatic, nothing compares quite to the technical skills and tactical awareness that Brian taught and pulled through Timmy and Erin.  Both grew from young kids with a passing interest in the game to become top-caliber players of renown throughout the southern Ohio youth soccer community.   Their leadership on-and-off the field is so impressive from their exposure to Brian’s coaching and skills training that you would think they were much older because of their maturity and the way they handle themselves in a multitude of situations.

What strikes me the most about Brian’s teaching methods is his ability to connect with each player, in so far as he had specific triggers to get the very best out of each individual.  It is one thing to say what you can do to help a youth athlete grow; it is entirely different to be able to reference many cases where one’s involvement made a true and noticeable difference in the life of children – both on and off the pitch.  In fact, on the day my daughter learned Brian was leaving Columbus for Manhattan, you would have thought her puppy died, she was that upset and spoke volumes about the type of coach Brian is to his players.  He made that kind of difference.

I cannot say enough good about how Brian knows the sport and how to get the very best out of each player.  If he had an academy in central Ohio, we would pay through the nose to have our kids working with him. “